Helping to display the best sides of assorted pigs, dogs, medieval knights and now snails is not an activity normally associated with a leading pre-cast concrete manufacturing company. Yet producing plinths for these various animals is very much a growth sector for Poundfield Precast.

Our team have delivered 46 plinths for the Snailspace Brighton trail, which began on 15 September and runs until 18 November.

The trail is made up of 46 fibreglass snail sculptures supplied by Wild in Art, every one colourfully painted with different eye-catching patterns. Each of the snails is being sponsored by a business in the Brighton area in aid of Martlets Hospice, which is located in nearby Hove.

It is hoped that the whole campaign will both further boost awareness of the hospice and raise hundreds of thousands of pounds for the work that it does.

Tim Evans, Poundfield Precast director – bespoke products, explained that “the plinths have to be solid enough to support each sculpture, but not so intrusive that they detract from the artworks themselves.

“I’m pleased that once again our attention to detail and first-rate customer service and delivery meant that all 46 plinths were ready for installation well before the Snailspace trail began. We certainly weren’t snail-like in fulfilling this order and we really hope that the trail will raise as much money as possible for Martlets.” 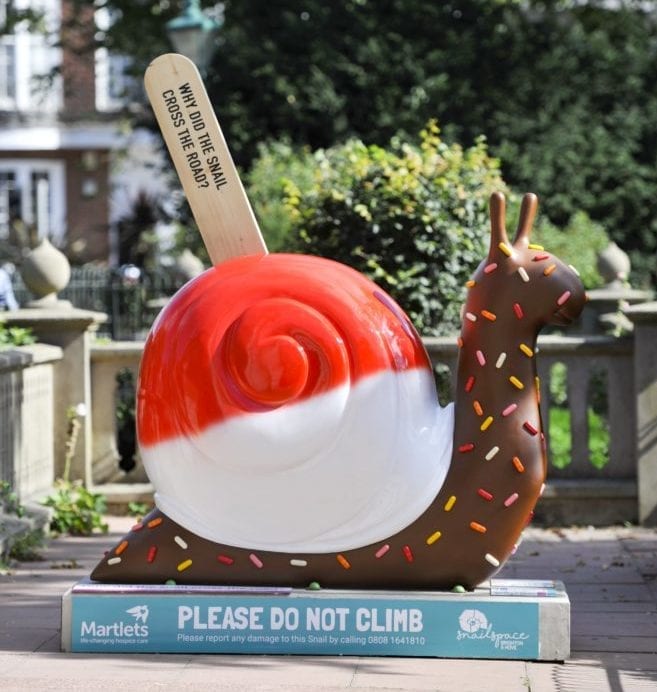 Martlets chief executive, Imelda Glackin, said: “the strikingly painted snails across our city will be a constant reminder to take a moment to enjoy the time we have with the people we share our lives with.”

Sarah Harvey, project manager at Martlets praised the “manufacturing expertise and customer focus of the Poundfield team in fulfilling such a large order in a comparatively short period of time. It was great to work with them.”

Matt Moss, finance director of Poundfield Precast added “we have intentionally and strategically positioned ourselves as market leaders in the manufacture of trail plinths as the numbers of them has grown exponentially in recent years and looks to continue for some time to come.”

We’ve previously supplied plinths for projects in towns in the centre, east, north and south of England, including for our own pig, The Ham-inator, as part of Pigs Gone Wild in Ipswich.